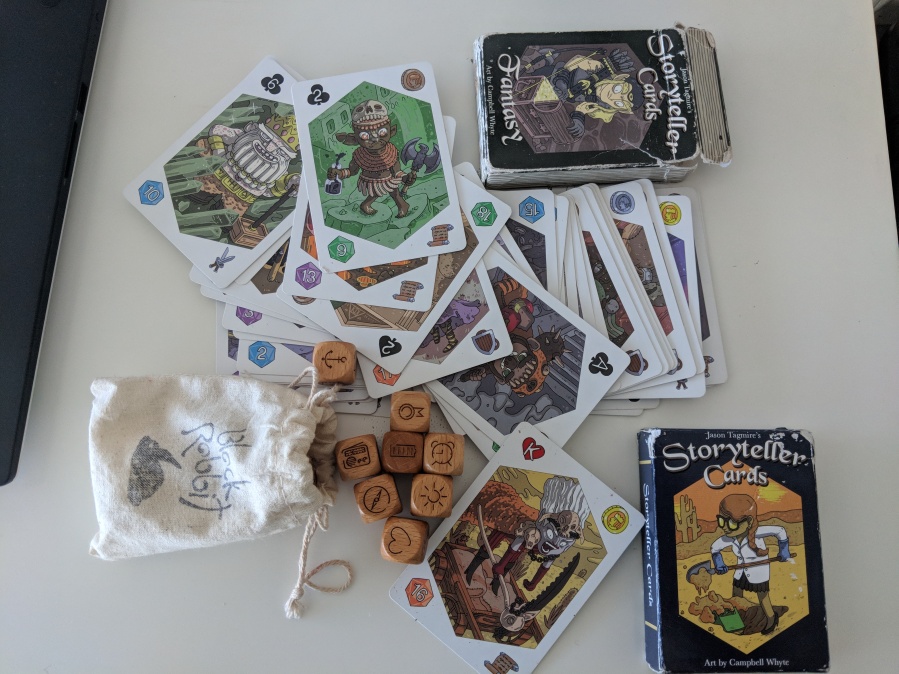 The game is a mashup of two storytelling games I found via Kickstarter; Storyteller Cards from Button Shy games, and a set of icon dice from Black Rabbit. The dice don’t seem to be available any more, but you can get the cards on the Button Shy website if you’re interested.

There are two decks of cards. I prefer the fantasy ones as it’s a genre I’m very used to, but many people I’ve played this with prefer the more ‘everyday’ version – and I use that term very loosely – some of the situations the characters on the cards find themselves in are pretty unusual!

The way you play the game is simple, draw a card from the deck – that is your character, whether it’s a Dwarven Cleric with a Greatsword, or an archaeologist on a dig in her white lab coat. You then roll three dice (or more, or less, depending on how much of a challenge you want, I’ve had a four-year-old nail a story with five dice). You then need to tell a story about your character, incorporating each of the items depicted on the dice.

The Intelligent Brute story came from this game and I’m sure there’s going to be more as time goes on. I doubt I’ll ever come close to the story I got from a six-year-old about the aforementioned archaeologist that somehow ended up with the Sydney Opera House being engulfed by a Kraken though, sorry.

For me, while the storyteller cards are a great prompt, the dice are really what set this up for fun. The game is as simple or as complicated as you want it to be and my best, and most interested storytellers have often been the youngest kids of any given group. They’ll play, tell an amazing story, run off, but be back several times over during the following few hours or days to tell another one.

Maybe part of it is having someone listen to you when you’re a young ‘un but they do insist on taking turns, even though I do often need ‘help’ when constructing my story (the character’s name is a good one).

I do see this exercise as something we should be doing more of with kids. Sir Ken Robinson has a TED Talk where he worries that we’re educating creativity out of our children. As someone occasionally recruiting for the current workplace, that’s a problem.

I did a bit of volunteer work with The Women’s Foundation while I was in Hong Kong, helping underprivileged but high potential teens (both boys and girls) with their conversational English. Compared with the kids of the same age I taught surf lifesaving to in Sydney, the HK kids, while utterly wonderful and incredibly smart, clearly hadn’t exercised their creative or storytelling muscles in a very long time. The Sydney kids used to make up their own rescue and disaster situations to act out – some of which were used by district assessors as exam scenarios for years afterwards. The HK kids struggled to put two images together in an original scene, even in their native Cantonese. Although, once they got those storytelling muscles warmed up and stretched, they were fantastic!

Creative problem-solving via envisioning different scenarios and telling their stories is going to continue to be a phenomenally important skill in the workplace, and life in general, in the years to come, and I’m hoping I can contribute my bit to that, with a couple of decks of cards and some wooden dice.