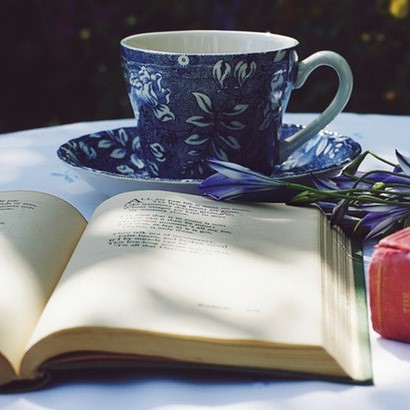 It was a chilled out Saturday afternoon and Ally and Cesca were enjoying the back garden. Tea and reading, life in the slow lane at its best.

Ally had already been fully grilled on the latest Chris developments, with Cesca suitably impressed and amused by a description of his home and the revelation of his ‘secret identity’. She’d even managed to pry out an admission of the kisses that had ended that evening.

Ally looked up at the sound of a car pulling into the driveway, putting her book on the table. A minute or so later, Chris appeared around the side of the house, visibly pausing when he caught sight of Cesca.

Cesca in turn was avid and not trying terribly hard to hide it.

Ally broke the moment with a smile, introductions and an offer of tea.

“Although we’re probably about to move to something a little stronger if you’d rather.”

Chris volunteered to fetch a beer for himself and whatever they wanted in the process. Following a vote for wine, he disappeared into the house, giving Cesca free rein.

“Ohh, he’s a cutie! I do think I approve. You’re right about the dimples.”

Ally giggled (giggled!) and shushed her friend, who ignored her, “He’s pretty at home here, just how much time have you been spending together?”

“Well once he got the attic door open and I found the room full of the Johnson’s old furniture, I needed his help getting it out, my home office in, and sorting through it all. Some of it I’ve kept, some is with Chris for repair or renovation and he drops pieces back as he finishes them. The rest I sold to him for his car boot project collection.”

“Which will keep me out of trouble for quite some time.”

The subject under discussion rejoined them and Cesca subsided.

Once everyone was settled with drinks, Ally took up the conversation, “Since you’re not lugging anything wooden in with you, and you said last time the drop leaf desk was going to take a while, I’m guessing this isn’t a furniture drop-off visit.”

Chris grimaced, “No, it’s actually to ask a big favour.”

He took a slug of his beer, “I’ve been asked to put in a proposal for a major renovation of a near derelict country home a couple of hours away. It’s a great project, and the budget is something an architect dreams of. The client is a bit of a stirrer though and has decreed that all three of the architects tendering for the job, and their partner/guest are to join him at his current home – it’s just near the old place – for an afternoon barbeque garden party thing.”

“And you need a partner?” Cesca interjected with a grin like a cat at the cream.

“Yes,” he shrugged, looking at Ally, “It’s not a nice thing to do, pitching you straight into that bunch of piranhas but if I announce I’m coming on my own, he’ll get whatever girlfriend he currently has to play matchmaker and I can’t do a good job of convincing him to let me fix his house if I’m spending my time trying to dodge assorted would-be loves of my life. Plus, if there’s anyone who can handle a pack of piranhas with grace and verve, it’s you.”

Ally laughed, “Flatterer, when is it?”

“I can always come down another time.”

“But it’s for your birthday.”

Chris put in, “I don’t want to spoil your birthday plans. I can work something out.”

Cecsca shook her head, then grinned wickedly, “Could you spin an invitation for two partners? Stir him back? I rather enjoy piranha baiting.”

Ally bounced, “That would be so much fun! Do you think we could?”

Chris pulled out his phone and sent a quick text. The response was almost instant, and continued over several messages in quick succession.

He grinned in turn, “Looks like we’re off on a fishing expedition. Do I need to put up any special provisions or first aid for the piranhas?”

Ally and Cesca laughed, “We’ll have it under control, just get us a dress code and some names to cyber stalk ahead of time.”

“Of more immediate interest though, do you want to stay for dinner? We were thinking about a barbeque ourselves and I’d rather trust the grilling side of things to you than me.”

Chris clinked his beer to Ally’s, then Cesca’s glass. “You hunt, I’ll grill. Give me a couple of moments to appreciate you both saving my neck, then I’ll get on with setting things on fire.”

One thought on “First Encounters”