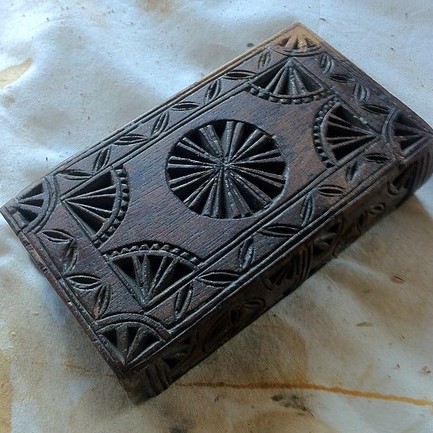 The group handed their horses off to the stable hands and made their way through the Great Hall to the various parts of the castle that called for the hours before the evening meal.

Lady Mellisande was waylaid by the steward’s assistant, and something in his manner made Alec pause in his plan to turn off and deal with yet more paperwork. His men paused also, feeding from his caution.

“Your Ladyship, I was just looking for you! Your godmother had sent you this delightful box as a gift. I believe the key pendant she sent you a few days ago must be to open it.”

“You opened my private correspondence?”

“It is my duty, My Lady, to peruse all your mail to ensure your valuable time is not wasted.”

If looks could kill, slimy little Bartholemew would be pile of ash on the floor. Alec moved to Lady Mellisande’s shoulder, silently providing support, Rosalinde and the men ranged behind.

“No, Bartholemew, it is not. Leave, and do not presume to open or make any sort of judgements on any of my mail or other deliveries again.”

The man simpered at her, clucked some words about her working too hard and not to strain herself and somehow managed to get his oblivious head out of the Hall before Mellisande could find something large and heavy to smash it with.

Taking a couple of deep breaths, she instead focused on the prettily carved box in her hands, “Oh, it’s a letter box.”

“That’ll be nice Your Ladyship, being able to chat so quickly with Her Grace whenever you like.”, Rosalind was clearly used to redirecting her mistress’s attention when she was set to boil.

“You’re so right and it appears there’s a letter waiting in it for me, that the little poke-nose couldn’t get at since Godmother was clever enough to send the key separately.”

The soldiers all knew they probably should be elsewhere but a set of gut instincts, well-honed over time kept them loitering. The youngest guard was possibly more motivated by Rosalind’s presence, but even he was shifting uncomfortably as Her Ladyship moved to a nearby table, retrieved the key she had been wearing as a pendant and opened the box.

The letter within was quickly read and Lady Mellisande turned white with fury. Alec wasn’t sure whether to advance or retreat when her flaming gaze locked on him. She thrust the letter out to him, “Read it aloud so I know I’m not hallucinating, then advise me on a course of action that doesn’t involve murder.”

He took a breath and began reading, including the gathered guards but keeping his voice low enough to avoid attention from other passing servants.

“My dear god-daughter, I hope this finds you well as I am concerned over your recent silence. Your husband was kind enough to provide me with a pair of letter boxes so we could communicate immediately and securely as he is of the belief that his letters and gifts to you may have gone astray. My worry is added to his as his last two missives have included a request from me to join me at Lilyfeld Hall to prepare for your presentation to court as the Duchess of Northaven. At the very least, we must have you properly outfitted. Please reply as soon as you can and tell me what has befallen you and your husband’s correspondence. With greatest affection, Lady Almeria, Dowager Countess of Lilyfeld.”

The young guard, Jase, took half a step forward and Alec gave him an encouraging nod.

“If it please Your Ladyship, the castle has been most indignant about the lack of attention you’ve had from the Duke, t’aint right. And it might be that it connects with some strange behaviour from Mister Bart.”

“This sounds like something best not discussed in public, Your Ladyship would you prefer to continue this conversation in your parlour or my office?”

“Your office is closer Captain.”

Once the group had relocated, Jase took up his narrative, “Mister Bart doesn’t socialise much, he likes to think he’s above the general staff in the castle and he’s not such good company that we’re likely to complain, but once or twice he’s been at the big table late at night and had a bit to drink, I’ve heard him once directly but others say they’ve heard it other times as well. He starts going on about how he and Your Ladyship are childhood sweethearts and when the whole table laughs at him, for many were children in the castle at the same time, he starts raving about how he’s destined to marry you and become the next lord of the manor and how this new husband of yours is stealing his property and will disappear soon enough and then there’ll be no one for Your Ladyship to marry except him.”

Mellisande took an unconscious step closer to Alec’s solid warmth, this was not a person she wanted prying through her private letters and packages. “Why hasn’t this been reported to someone?”

“The sheer absurdity of it Your Ladyship, but if it’s spilling out into his sober life and interfering in the safe running of the castle, then I’m willing to be called absurd.”

“So am I, thank you for your information soldier.” Alec looked at Nathan, “I think this is going to have to go higher, and we’re going to need more information.”

“You want me to shadow him?”

“Please, and take Jase with you, he’s a good tracker, I want to make sure there’s someone free to report back if necessary. We’ll be in Master Bartholemew’s office. Miss Rosalind, would you be so kind to ask the Commander, the Steward and His Lordship to join us there?”

Rosalind looked nervous, Mellisande modified the request, “Go to my father first and tell him I need his help, he’ll round up the other two when you say they’re required.”

The maid nodded and followed the two soldiers out the door. Alec turned to his remaining guard, “Ready to conduct an office search?”

“And then some sir, this sounds like a nasty business and I’d like to see it resolved.”

“I’ll join you in the office Captain, but will use the time to reply to my godmother. She’s waited long enough to find out what’s going on.”