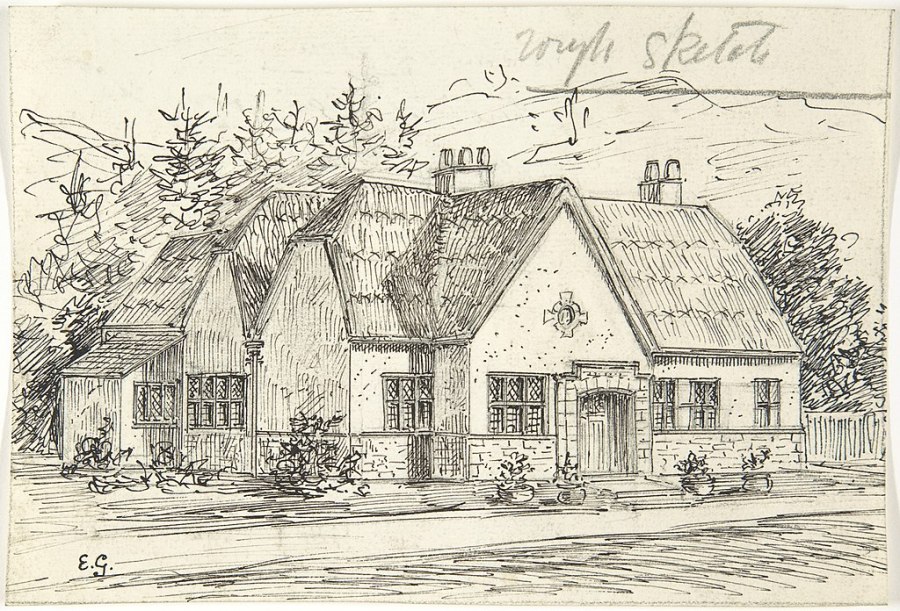 This is the introductory piece for a solo RPG I’ve been playing called One Day at a Thyme. I’ll add a few of the ‘diary entries’ as I go…

There’s a town at the base of the mountain, it’s hoping to grow into a city soon and the new buildings are already starting to wash up against the lower slopes of the peak. They taper off fairly quickly though, as the slope steepens and the would-be lords of the hill find it too hard to clear and create enough level ground for their demonstrations of wealth.

Those who wish for a less ostentatious home, however, can still find an accommodating part of the slope.

In fact, the area my cottage has been sitting in for more years than I care to count would be an ideal spot and size for one of those new-come lords of commerce. Unfortunately for them, it’s mine. And they know better than to cross me.

At least, they do now. It took a couple of interesting encounters in which one or two arrogant merchants were sent scurrying down the mountain, tails between their legs, but now my home is respected and any visitors I have are pleasant rather than demanding.

It’s a delightful spot, tucked into a shallow fold in the mountain, that brings shelter from the wind, but still allows me a view kings envy. I know, because they’ve told me.

The narrow, winding road that leads from the top of the town to my front door is enough for a small cart but not much more. It’s why I prefer to build bulkier items, when I need them, rather than try to have them carried by sweating, swearing porters. The trees simply don’t allow access.

The trees thin as they approach my clearing, there’s no hard line between the one and the other and the blended edge of the forest is a wonderful spot for berries of all kinds in the autumn.

The road continues past my door, but few take it. The only person further up the mountain is a tetchy mage in his stone tower. He says he has to keep up appearances, then swears a blue streak about the wind. I laugh at him. His tower is purely for appearances I know. It’s no more than an occasional lookout and a nice spot for a leisurely drink on a balmy summer afternoon. Living is done in the cottage attached to the base, not to mention the extensive tunnel system running through the rock behind and beneath.

And if one of those tunnels happens to lead to my second larder, well that’s nobody’s business but ours.

The back of my cottage is built into the mountainside, no point having it sticking any further out than it has to, I have no wish to challenge the wind and it’s content to leave me in my little nook most days.

My garden, therefore, surrounds me on three sides, and is well-watered from an irrigation system I’ve built from the stream running along the far end of my space. It’s a fast, deep run of water that turns into a proper, navigable river when it joins with another at the head of the town.

I keep a cow, a woolly goat and a sweet little mare in a warm stable at the edge of the garden, with easy access to the stream. It’s a challenge keeping them from my vegetables, so I plant them on the opposite side and leave them with herbs and blooms they have less of an appetite for. Not that the goat doesn’t try. I’ve had to put the bee hives on the opposite side as well. That goat seems to think she can eat anything and refuses to learn otherwise.

I’m not the world’s greatest gardener, hence the irrigation system. The less I need to deal with, the better. So my beds are filled with the easy, practical and happy-to-be-neglected varieties of vegetables, herbs and occasional blooms. I still enjoy beautiful colours and scents after all.

The path to the front door is lined with lavender, which fulfills all my preferred plant categories and provides a wonderful base for my bees’ favourite honey – considered something of a delicacy in the town below.

The cottage itself is rather large for the label and entirely grey, built of stone and slate. I sometimes change the colour of the door, and the shutters, depending on how the mood takes me. For the moment, they’re a fresh, cheerful green and blend beautifully with my garden.

It’s a simple layout, four rooms above and below with a hall and stairway parting the front two. There is, of course, a fifth room on the ground floor, the second larder, carved into the mountain and you have to know the door’s there in order to see it.

I don’t have any secrets to hide in there right now. So it’s only being used to keep the butter cold and other perishables fresh. It’s not a pleasant place to hide a person – too chilly – so I do have a fifth room on the upper floor as well, except, since you have to get to it from the attic, that’s probably not the most accurate description.

On the ground level, the floor is of the same stone as the house, worn smooth and silky over time and scattered with rugs against the chill. The upper floor is also rug-strewn, but the floor they cover up there is thick old planks of wood, dark with age.

Most of my furniture is wooden as well, polished to a gleam thanks to wax from my helpful bees and my occasional need to burn off energy in simple, mindless tasks.

My little nook in the mountain is something of a sun trap, and every (non-hidden) room takes full advantage with large, well-glassed windows. I can go several months of the year without needing to light a fire for anything other than cooking.